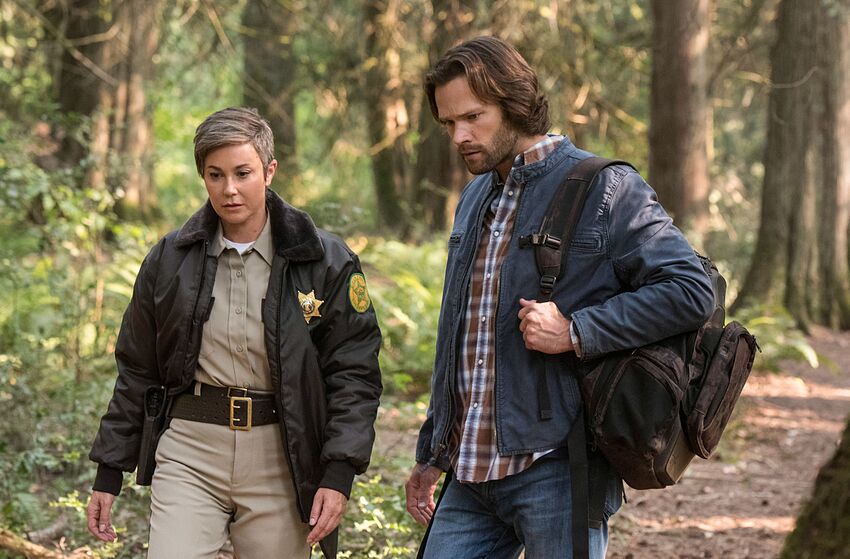 Sam and Dean team up with Jody to track down a potential weapon to use against Michael. Elsewhere, Jack finally gets a win, but will it last?

We saw the welcomed return of Sheriff Jody Mills on Supernatural last night, as she draws the boys to Sioux Falls to follow a lead to what she thought was a human serial killer. Turns out, the killer is actually an alternative version of Kaia, a character who guest starred last season but was unfortunately killed off before becoming part of Jody’s little hunter family. This new Kaia has emerged from another universe, just like the archangel Michael had done. This would explain why Michael confronted Kaia whilst possessing Dean and offered her an alliance in exchange for her spear, her only weapon aside from her incredible martial arts.

After being stabbed in the arm by the spear whilst in Dean’s body, Michael sends vampires and werewolves after Kaia to retrieve the weapon for him. The monsters are clearly no match for Kaia and she even helps Sam, Dean and Jody escape their grasps. However, she still remains hostile and won’t agree to give up her weapon to help fight Michael, and then disappears into the woods. I think we’re all hoping to see more of Kaia and discover the answers to some leftover questions.

We all know that Kaia’s storyline last season was an attempt to create a backdoor spin-off involving Jody and her hunting family, made up of Claire, Alex, Patience and, fellow Sheriff, Donna Hanscum. This show was unfortunately not picked up, so the story that was left open with the alternative version of Kaia needed to be wrapped up and I think the writers did the best job they could in doing that. Obviously, there are still discrepancies like how did the alternative Kaia transport herself from her universe? If she was close with the real Kaia, due to their psychic dreamwalking abilities allowing them to vision each other across universes, why was she acting like the villain in last season’s episode? I am hoping they will fill-in these holes at some point.

Claire is a fan-favorite character so it was a shame not to have an appearance from her in this episode. However, the show is getting very good at covering the characters’ storylines without actually having to have the actors in the episode, most likely a necessity as the show’s cast has grown so much over the years. Claire, as well as Bobby, Mary, Nick and Rowena, do not star in the episodes but they are mentioned as being busy elsewhere to keep their characters active and to keep the story believable.

Dean does what he does best in this episode; pretends that he’s fine when he’s actually working through something really intense without opening up to anyone. His character is so interesting and complex. Spending the entire episode literally going at 80 miles per hour, running ahead of Sam and Jody, he keeps up the pretense that he’s just eager to find Michael. However, at the end of the episode, Dean reveals to Sam that the whole time he was being possessed by Michael he felt like he was drowning and admits that he wasn’t strong enough to fight back. This imagery was so impactful and heartbreaking that I think we’re all praying for Dean to get his revenge and take out Michael.

Meanwhile, at the bunker, Jack prepares to leave as he feels useless without his powers, but something pulls him back when he spots Castiel attempting to save an innocent girl from a witch’s aging curse. Sitting with the girl as she deteriorates and becoming connected to her, Jack saves the day and quite literally brings the victim back to life by retrieving her spirit from the witch’s necklace. Castiel praises his adopted son with pride, comparing Jack’s mind and heart to that of a hunter’s. The viewer has become so close to Jack and his struggle that it’s really rewarding seeing the character become stronger and more secure.

Nevertheless, this is Supernatural and happy endings are scarce. Whilst he saved a life in this episode, it seems there may be dark times ahead for Jack, as he is shown in the last scene coughing up blood. Anyone else starting to feel protective over the character? With Jack having already gone through a rollercoaster of emotions this season, this twist foreshadows that the character might be dying, and I don’t think fans are going to be OK with that.

Will Jack confide in Sam, Dean and Castiel or keep it a secret? The episodes to follow are sure to be tense and shocking.

What do you think of Jack’s life being at stake? Let us know in the comments!