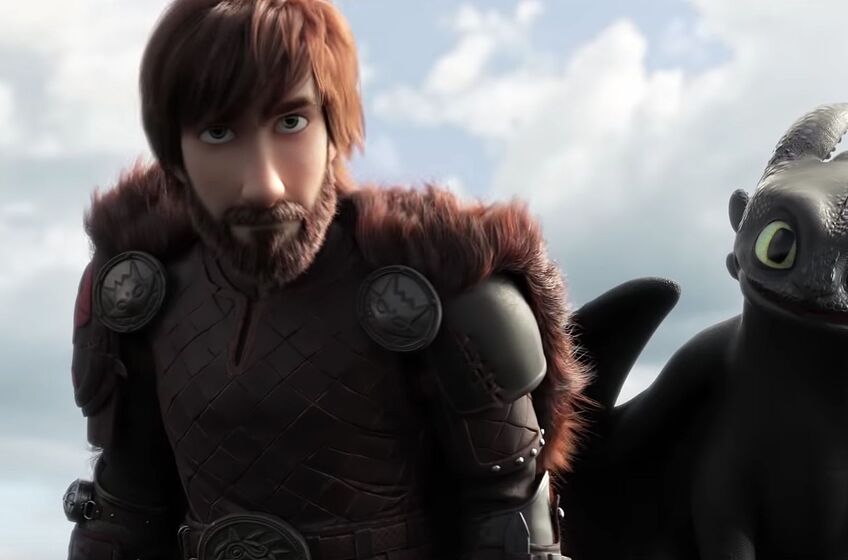 Still from How to Train Your Dragon: The Hidden World (2019). Image via YouTube/DreamWorks

Things are changing for Hiccup and Toothless in How to Train Your Dragon 3. One has a beard and the other has a girlfriend now.

A new trailer for How to Train Your Dragon: The Hidden World has been released and with it comes interesting details about the dragon/Viking world we’ve come to know and love.

Not only does Hiccup have a beard that any man would be jealous of (eat your heart out Chris Evans), but Toothless is adorably looking for love.

The trailer shows us how our heroes have been doing since we last saw them, which seems to be pretty good in their Viking and dragon utopia. It also introduces us to an apparently hidden world of dragons that includes the perfect female for Toothless, a Light Fury. Of course there is more to the story than love for our favorite dragon and a beard for our hero. There is also a dragon hunter who is after our boy Toothless, simply because he is the “last of his kind.”

Billed as a conclusion to the story of our fearless Viking and his best friend, the trailer is equal parts hysterical (just check out Toothless’ attempts at flirting and a mating dance) and sad. This is the end of the road for our friends and that means we have to dive deep so we can appreciate every moment we have with them.

First, let’s go back to the bearded Hiccup. Is it wrong to call an animated character hot? Giving Hiccup a beard certainly gives him an authority he seems to have been missing before. Plus it makes him stand out on screen. Strangely, the beard doesn’t seem to be present for most of the trailer. Some fans on social media ponder if a much older Hiccup will narrate events that happen in The Hidden World. If you look closely (around the :22 mark), you’ll notice Fury badges on his armor. Does Hiccup become some kind of Lord of the Dragons? We’ll just have to wait and see.

If the bearded look was a glimpse at the future, this means Toothless and Hiccup are (hopefully) not separated from each other. While we wait for the movie to come out (or at least another trailer), at least we got to see the gift of seeing Hiccup all grown up.

When it comes to Toothless, is there anything more adorable than a dragon trying to attract a lady friend? I think not. Watching Toothless do his mating dance for the Light Fury is enough to get anyone laughing. Plus, seeing Hiccup and Astrid mess things up for him when he first meets his new friend is priceless. Nothing says annoyed dragon better than a little side-eye.

On Twitter, reactions over the trailer were mixed. Many people were sad to see this series is finally coming to an end. Others shared their appreciation for both our bearded hero and of course the upcoming romance between Toothless and the new Light Fury.

I’m not quite sure what to think of the How to Train Your Dragon 3 trailer but it starts with an old, bearded and grizzled Hiccup which is kind-of amazing? pic.twitter.com/IgakiV3NlN

How To Train Your Dragon 3 is guaranteed to make us cry but I wanna go deeper.

I want this movie to SOB me into a coma.

Related Story: 20 funny comics to lighten your mood and make you laugh

With fans eager to watch the third film, it makes sense some are already anticipating the fact that it will be sad to see Hiccup and Toothless’ story come to an end. As long as we get to see a beard on Hiccup for longer than a second, and all of the Night Fury mating dance, we can always relive the dragon glory days with the movies and the Netflix series.